I feel like I need to do a post updating y'all on The State of the Recall here...but honestly, it's hard to keep up on everything happening. Here are a few updates on various issues, in no particular order. Ready?

1. The state leg passed a voter ID bill, which invited a couple of lawsuits by the ACLU and League of Women Voters. A Dane county judge agreed with the groups that the bill doesn't do much to prevent voter fraud, but instead disenfranchises certain groups of voters (students, the elderly, the poor), so he blocked the bill. Repubs cried foul because that judge signed a recall petition and pictures of his signature were all over the Tea Party twitter feeds. A second Dane county judge upheld the ruling.

2. John Doe investigations into criminal activities during Walker's campaign have led to a few arrests, and seem to be creeping ever closer to the governor himself. In fact, Scott Walker has already used public money to hire powerful Chicago attorneys for criminal legal defense. This is puzzling, because he's not actually allowed to use public money for criminal legal defense unless he is 1) under investigation or 2) has been charged. He claims neither of these things is true...so either way he's breaking a rule somewhere. Either he's using public money inappropriately, or he's actually under investigation or been charged. When a friend of mind explained this to me, neither one of us could understand why the media hasn't made more of this. Seriously, you'd think this would be huge - a person holding the highest position of public office in the state has, one way or another, BROKEN THE LAW.

3. Remember the Supreme Court election last April? When the incumbent judge, David Prosser, a former Republican legislator with a known temper problem who had once called the Chief Justice a "bitch" to her face barely squeaked out a win by 300 votes? And then he put his hands around the neck of another justice in her office? And then he got diverticulitis last fall and had to sit out on a bunch of rulings because he was in the hospital? Seriously, I couldn't make this up if I tried. Well, now disciplinary action is being recommended for his inappropriate and violent behavior last June (the choking incident).

4. Four Republican state senators are up for recall this year. One of them, Pam Galloway, just announced she is resigning, supposedly for family/personal reasons, but it prevents her from having to run a campaign to keep her job. This makes the state senate an even 16-16 split, though they are out of session now probably until after the recall elections, so this doesn't do the Dems much good.

5. The GAB (Government Accountability Board) released scanned copies of the recall petitions online. The Tea Party has set up a website where you can search for people's signatures on recall petitions. So much for privacy, huh?

6. According to polls,the only person we know can beat Scott Walker in a recall election is Senator Russ Feingold. Everyone else (real or possible contenders) would be in a dead heat. But guess what? Feingold won't run. C'mon, Russ. We neeeeeeed you!

And I don't even have the energy to tell you about the craziness of the latest legislative session. There is never a dull moment in Wisconsin politics these days, let me tell you.

How's about I end on a high note, with some pictures of the kids outside today? Warm spring weather continues, and we've been outdoors more than not.

Daniel doing his Jackson Pollock impression using water and the side of the house: 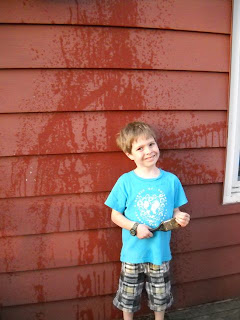 A rare photo op with me IN the picture: 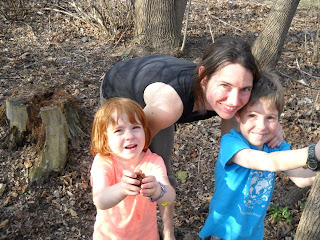 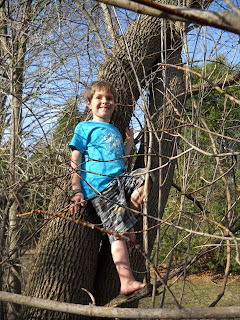 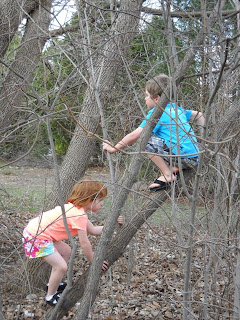 Digging in a rotten tree stump (seriously, who needs toys?): 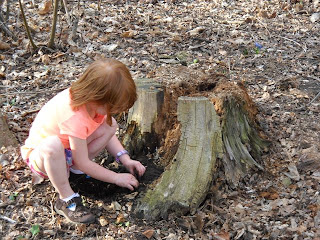 Jenn-Jenn, the Mother Hen said…
Oh my goodness, who knew Wisconsin was a hotbed of political skulduggery? And your kiddos! I blink, and suddenly they are 3 feet taller and seemingly ready to rush off to conquer the world. Time flies....
3:09 AM

Anonymous said…
This comment has been removed by a blog administrator.
10:08 PM 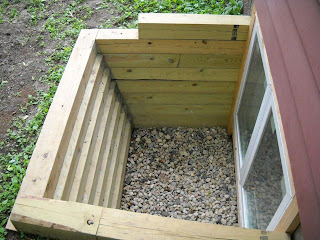